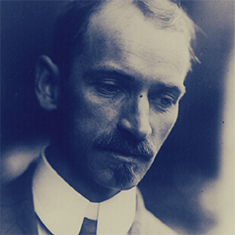 Glenn Hammond Curtiss was a world famous aviation pioneer before becoming a land developer in South Florida. Born in 1878 in Hammondsport, New York, Curtiss was a contemporary of the Wright Brothers. Like them, he was interested in bicycles as a young man, and opened a bicycle repair shop in 1900. Intrigued by speed, Curtiss turned to motorcycles and designed a machine with a lightweight, high-power engine. He founded the G.H. Curtiss Manufacturing Company in New York in 1902, and began producing the Hercules motorcycle. After setting world records for motorcycle racing (he became the “fastest man in the world” in 1907 when he sailed past all previous records at a speed of 136.36 MPH on a motorcycle of his own invention on Ormond Beach, FL), his company drew the attention of aeronautical
experimenters. In July 1904, Captain Thomas Scott Baldwin used a Curtiss two-cylinder engine to power the first successful dirigible to fly in the United States, the California Arrow. 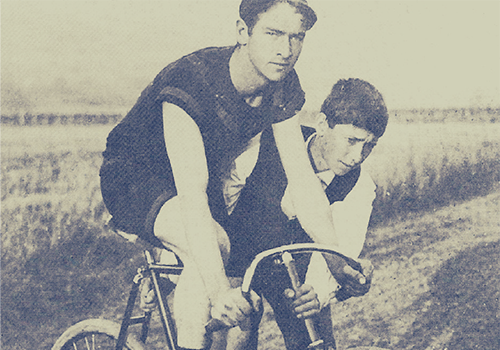 The “Hammondsport Boys.” Glenn Curtiss and Tank Williams in 1896 doing what they loved best, bicycle racing, which rivaled baseball as America’s national sport. 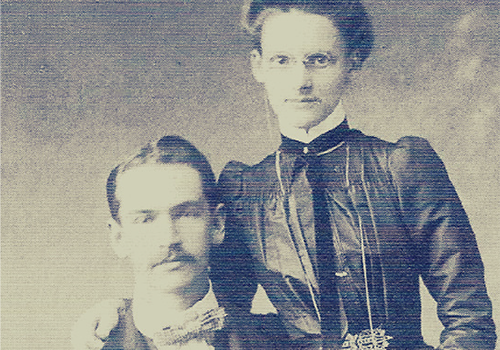 Glenn Curtiss married Lena Pearl Neff on March 7, 1898, a sawmill superintendent’s daughter. She was his closest confidant and friend. 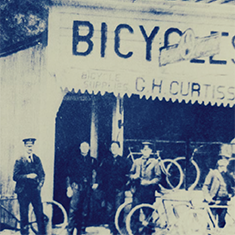 Being a “man with family responsibilities,” Curtiss opened a bicycle shop that was the home of his own Hercules-brand bicycles, and later his motorcycles of the same name. 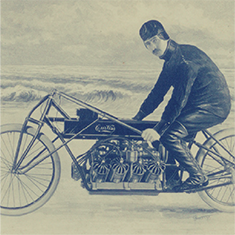 On Jan. 24, 1907, Curtiss became the “fastest man in the world” by setting a land speed record of 136.36 MPH on Ormond Beach, FL on his V-8-powered motorcycle.
Famed inventor Alexander Graham Bell invited Curtiss to join the Aerial Experiment Association (AEA) in 1907. Curtiss turned to airplanes after Bell’s man-carrying motorized kite was deemed a failure. Curtiss became an enthusiastic flyer, and after the AEA disbanded in 1909, established his own airplane company in Hammondsport, New York. The second airplane company that Curtiss established, the Curtiss Aeroplane Company, became the world’s largest aircraft manufacturer during World War I. earning Curtiss the title of “Father of American Aircraft Manufacturers.” The most widely produced model during the war was Curtiss’s JN-4, “Jenny,” used to train US pilots. Additionally, he developed an airplane that could land on water for the US Navy and teaching the first US Naval aviators to fly, becoming the “Father of Naval Aviation.” After a business set-back, the Curtiss Aeroplane & Motor Company was formed with a Wall Street syndicate, with Curtiss as president. The Curtiss NC-4 “Flying Boat” crossed the Atlantic Ocean in 1919, making the first transatlantic crossing in the history of our country. When the company underwent major financial reorganization in 1920, Curtiss relocated to southern Florida and extended his efforts to real estate. As William M. Leary wrote in American National Biography, “Curtiss stands in the forefront of American aeronautical pioneers, second only to the Wright brothers in historical significance.”
In South Florida, Curtiss, in partnership with James Bright, developed the towns of Country Club Estates (now Miami Springs), Hialeah and Opa-locka during the “land boom” of the 1920s, while continuing to pursue his intense interests in aviation. Curtiss established the first flying service schools (both land and sea) at Miami’s first municipal airport and donated the land for Miami’s first airport. He also donated land in Opa-locka to the US Navy for an air base, which is now the Opa-locka Airport, and received the 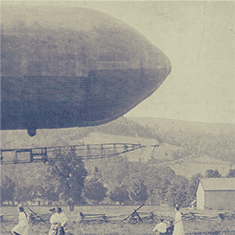 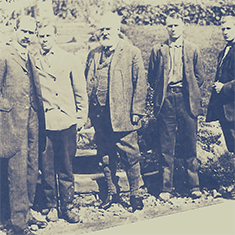 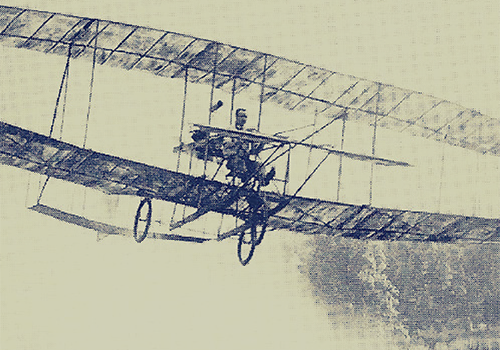 On July 4, 1908, Curtiss completed the first leg of the Scientific American Trophy by piloting the June Bug 5,090 feet and making the first officially-recognized and publicly-viewed flight in America. A year later, Curtiss won the second leg of the trophy in 1909 by flying 24.7 miles and establishing a new world record in the Golden Flyer.

Glenn H. Curtiss is considered the “Architect of Aviation,” “The Henry Ford of Aviation,” “Father of American Aircraft Manufacturing,” and “Father of Naval Aviation.” His contributions to aviation history in this country are unparalleled. Glenn H. Curtiss was designated a Great Floridian by the State of Florida’s Secretary of State in 2000, and has been labeled “an incurable Florida addict.” Despite his short 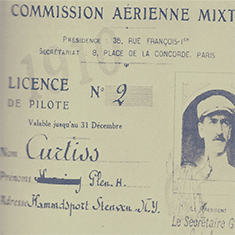 In 1909, Curtiss won the Gordon Bennett Cup in Rheims, France with an average speed of 46 MPH, and earned the honor of France’s pilot license #2. (#1 was issued to French pilot Louis Bleriot.) 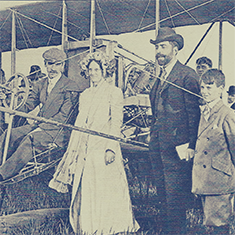 In 1910, Curtiss won the third leg of the Scientific American Trophy in his Hudson Flyer, which gave him permanent possession of the trophy, the $10,000 prize, and established the practical value of the airplane after flying from Albany, NY to New York City.
lifetime, he was awarded the Congressional Medal of Honor by the US Congress for his work during World War I and is credited with 400 patents and over 500 inventions. 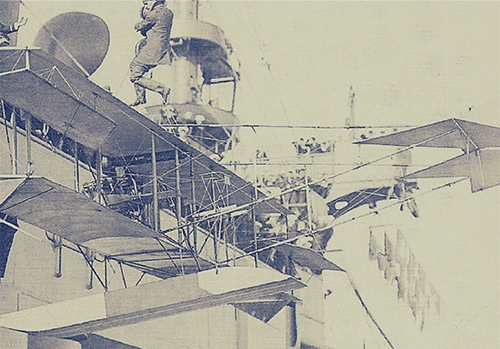 Glenn Curtiss is known as “The Father of Naval Aviation” for his joint efforts with the US Navy and his pioneering designs of the seaplane and flying boats that allowed for take off and landing on naval ships.

Opens a bicycle repair shop in Hammondsport, G.H.
Curtiss Manufacturing Co., begins selling his own brand
of bicycle, the Hercules

Builds his first motorcycle, under the Hercules name

Sets world speed records for 1, 2, and 3 miles on motorcycle 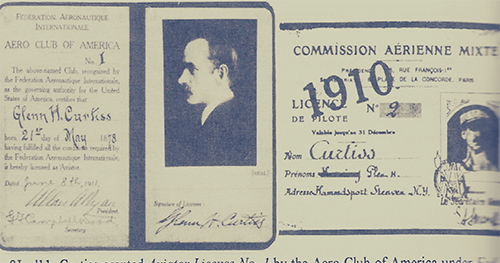 The Aero Club of America under Federation Aeronautique Internationale (F.A.I.) issued pilot’s license # 1 to Curtiss in recognition of “the first person to publicly fly in the United States” (July 4, 1908 June Bug flight). # 2 is Frank P. Lahm (US Army Pilot # 1), # 3 is Louis Palham, and Orville & Wilbur Wright are # 3 and # 4..

Develops Hialeah, Florida including Hialeah Racetrack (1925)
• Donates his WWI training field in Miami to the Navy

Creates the Curtiss Aerocar Company in Opa-locka, Florida
• Curtiss tows an Aerocar from Miami to New York in 39 hours

Glenn Hammond Curtiss inducted into the National Inventors Hall of Fame with this notations – “Glenn Curtiss is considered the most influential man in the evolution of aviation. His keen insight into aeronautics and aviation, despite having no formal education past eighth grade, affirms his genius. He holds the Collier Trophy and the Langley Medal.” 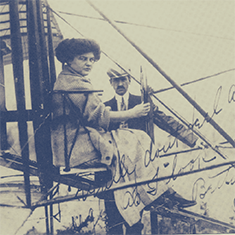 Blanche Stuart Scott, student of Glenn Curtiss and later called the “Tomboy of the Air,” was the first woman to fly in public in the US on Sept. 2, 1910 when the plane’s throttle block “accidently” slipped out of place and she “soared” to 150 feet. 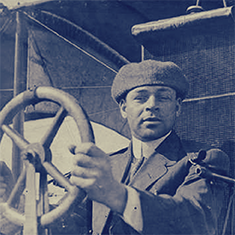 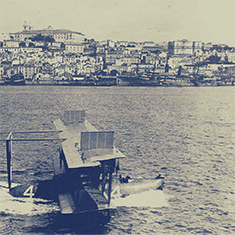 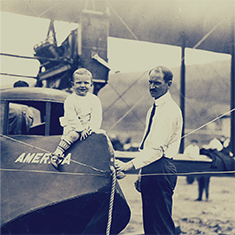 Glenn Curtiss taking some time out with his son, Glenn, Jr. circa 1914. 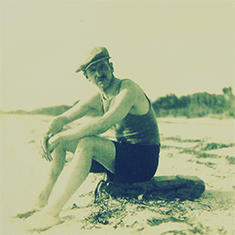 Glenn Curtiss “retires” to Florida and heads to the beach for a little relaxation. 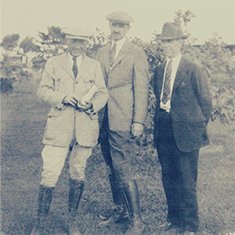 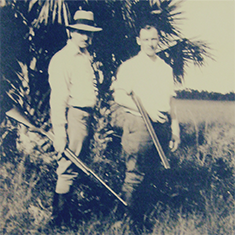 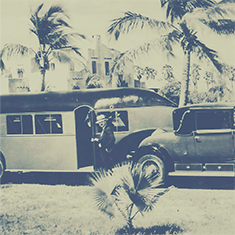 Glenn Curtiss with one of last inventions, the Aerocar, which was manufactured in Opa-locka and sold in the Coral Gables showroom. 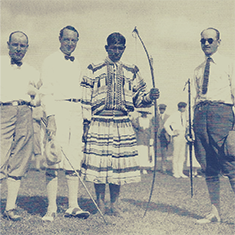 Glenn Curtiss (far right) and Seminole friend getting ready to play a round of archery golf on the golf course in Miami Springs that he hired members of the Seminole Tribe to build. 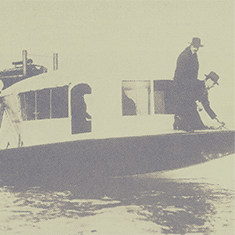 Glenn Curtiss on board his invention, Scooter, a shallow-draft boat with an aircraft propeller that was the precursor of Curtiss’s invention – the airboat – the perfect craft for skimming across the Florida Everglades. 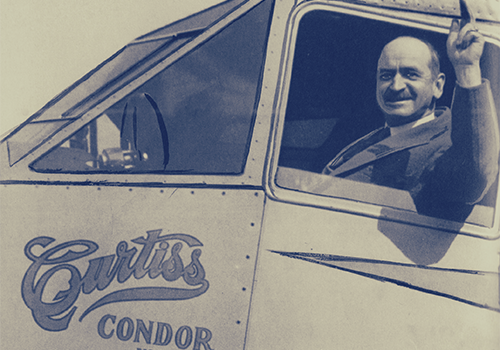 Glenn Curtiss before taking off to retrace the route of the of the historic Hudson River flight. Two months later, he died in Buffalo, NY on July 23, 1930 from an embolism following an emergency appendectomy.