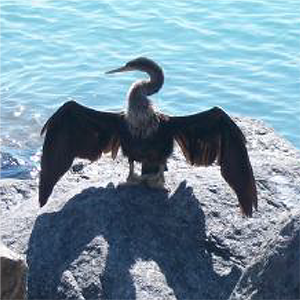 In conjunction with the Curtiss Mansion and Smithsonian Institution’s Water/Ways exhibit, come participate in a presentation and virtual bird walk through Miami-Dade County (without leaving the air-conditioned comfort of your seat!) by internationally recognized Tropical Audubon Society experts Paul Bithorn and Joe Barros on how to identify South Florida’s beautiful water birds – many of which we see on a daily basis.

Paul Bithorn, a Virginia Gardens native (an endangered species in his own right) and a Tropical Audubon Society (TAS) Board member, will share his vast knowledge of South Florida’s water birds. Bithorn has guided many TAS, environmental and civic groups on field trips for over 20 years. As Mayor of Virginia Gardens for nine years, he continuously urged the residents to xeriscape by planting native species of plants and shrubs to help the local bird population. He has contributed to several bird-finding guides, including the ABA’s “A Birders Guide to Florida, Fourth Edition”, “A Birders Guide to the Bahama Islands”, “Parrots of South Florida” and “The Crossley Guide: Eastern Birds.” His documentation of parrot species in Miami was featured in the June/July 2008 issue of the National Wildlife Federation magazine and the November 1, 2008 issue of “Birders World.” Known for his keen sense of humor, he has seen 428 species of birds in Florida.

Jose Francisco Barros, DDS is a Miami-area Endodontist and an adjunct professor at the Nova Southeastern University School of Dentistry as well as the President of the Tropical Audubon Society. He has practiced in South Florida for 25 years, and joined Tropical Audubon Society shortly after arriving in Miami in 1987. He joined the TAS Board in 1992 and became its president in 2002.

Born in Spain after his family escaped the revolution in Cuba, Joe and his family immigrated to United States in 1962. Joe grew up on the North Florida beaches and along the St. Johns River where he came to appreciate the natural environment that made Florida so unique. As a young boy exploring the great outdoors, he learned to identify local fish, snakes and birds. As a Boy Scout, Joe furthered his knowledge of the environment by hiking and camping in area forests. Primed by his outdoor education, Joe attended University of Florida where he received a B.S. in Zoology. He then attended Emory University where he received his dental degree in 1987; a certificate in Endodontics was earned in 1999 from Nova Southeastern University.

He balances his private dental practice with his love of Nature. In the 25+ years since joining TAS, Joe has run Native Plant Sales, led bird and plant walks locally and internationally, and has represented Tropical Audubon Society at numerous events. During his tenure as its president, TAS has been instrumental in defeating plans for the airport at the Homestead Air Reserve Base, protecting Biscayne Bay, holding the Urban Development Line, and supporting the Comprehensive Everglades Restoration Plan (CERP).