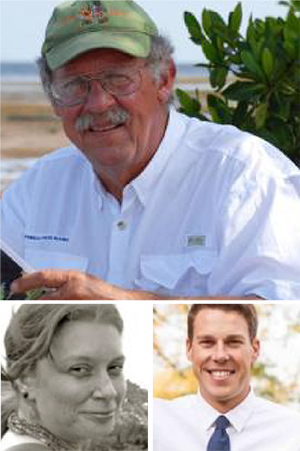 In conjunction with the Curtiss Mansion and Smithsonian Institution’s Water/Ways exhibit, come listen and participate in a lively panel discussion about water issues and the importance of water preservation in our community by experts  Dalton Hesley, Dr. Jennifer Vielleux, Dr. Jennifer S. Rehage, PhD, Joe Podgor and Caiti Pomerance.

Harold R. Wanless, Ph.D., is Professor and Chair of the Department of Geological Sciences at the University of Miami. He received his B.A. in Geology at Princeton University, his M.S. in Marine Geology at the School of Marine and Atmospheric Science at the University of Miami, and his Ph.D. in Earth and Planetary Sciences at Johns Hopkins University. His Master’s Thesis was documenting the evolution of sedimentary environments in Biscayne Bay as rising sea level flooded the bay over the past 6,000 years. His Doctoral Dissertation was a paleo-environmental reconstruction of the early Paleozoic (Middle Cambrian) sediment strata in the Grand Canyon, a sequence recording dozens of marine to non-marine cycles resulting from sea level cycles. In 2010, he was named a Cooper Fellow in the College of Arts and Sciences at the University of Miami. Dr. Wanless is actively interacting with policy and legislative groups at the local to federal levels to guide necessary decisions, including speaking at Everglades Coalition annual meetings, to various Florida Legislative committees, environmental and industry executive and steering committees, and the Council on Environmental Quality in the White House. He is co-chair of the Science Committee of the Miami-Dade County Climate Change Advisory Task Force and works with the South Florida Regional Planning Council to provide the science background for and projections of sea level rise for the coming century.

Dalton is a Master of Professional Science graduate from the University of Miami, Rosenstiel School of Marine and Atmospheric Science specializing Tropical Marine Ecosystem Management. Originally from Minnesota, he graduated from the University of Minnesota-Duluth (UMD) with a B.S. in Biology, focusing on animal behavior. In his my senior year, while studying abroad in the Bahamas, he discovered his passion for the ocean and coral reefs. After graduating from UMD, he took a year off to travel and expand his horizon, while also learning all he could about the ocean and its mysteries. He “fights the good fight” for the ocean, raising awareness and helping to promote a cleaner world for us all.  Currently he is a Research Assistant in the Benthic Ecology lab at the University of Miami focusing on coral reef research and restoration. He is also Program Manager of the Rescue A Reef program (www.rescueareef.com), a citizen science program offering expeditions for participants to receive a hands-on educational experience in coral gardening.

Jennifer currently works as a Postdoctoral Associate for the Southeast Environmental Research Center within the School of Environment, Arts, and Society at Florida International University. Within this position, she manages the MacArthur Foundation supported Serengeti – Lake Victoria (SELVA) Sustainable Water Initiative to help examine water security aspects of ecosystems and human communities the Lower Mara River in Tanzania. Jennifer has worked with communities at different scales in Macedonia, Albania, and Greece in the Lake Ohrid basin; in Ethiopia and Egypt on the Nile River; in Laos on the Mekong River; in Canada, the United States, and Sovereign Nations on the Columbia River; and most recently in Tanzania on the Mara River.

Having earned her PhD in Geography from Oregon State University under the supervision of Dr. Aaron Wolf, Jennifer focused her research on the question of human security changes related to water resources development. For this, she conducted field work in Ethiopia at the  Grand Ethiopian Renaissance Dam in 2012 and in Laos PDR at the Xayaburi Dam Project in 2013. Aside from her recent research projects, Jennifer’s career includes research, writing, and analysis for Oregon State University’s Transboundary Freshwater Dispute Database, The Nile Project, The World Bank Group, various US Government agencies including the Institute for National Strategic Studies, the United Nations Development Programme’s Prespa Park Project, Bright Power LLC, Eco-Chick.com, and E/Environmental Magazine.

Jennifer earned her BS and MS in Environmental Science, focused on hydrogeology, from the University of New Haven in Connecticut. She is a former Boren Fellow, USGIF Scholar, and recipient of the Gray Family Fund for Geographers. Jennifer is currently a Fellow with the Frost Science Museum, in Miami, Florida.

Jennifer also photo-documents rural communities where she conducts research. Her images can be viewed on www.jenniferveilleux.com.

Dr. Rehage is an Associate Professor in the Earth & Environment Department of the Southeast Environmental Research Center at Florida International University.

Joseph “Joe” Podgor has served on dozens of local, state, and federal advisory committees, and has been honored locally and nationally for his volunteer work to protect valuable environmental resources for the betterment of South Florida. He pioneered groundwater protection in the United States with the enactment of local regulations to protect wellfields and public drinking water supplies. He is among those who first fostered the formation of the Everglades Coalition, a national conglomerate of groups committed to saving the world’s most precious wetland.

Born in Philadelphia, Joe arrived in Miami Springs with his family when he was 11 years old. Following graduation from the University of Pennsylvania, including two years at the Wharton School of Finance and Commerce, Joe dedicated his efforts, knowledge and skills to a better environment through awareness and service:

Today, Joe is in sales for Apple Computer, Inc., engages in private environmental consulting work and is a Special Master for Miami-Dade County’s Code Enforcement Division of the County Clerk’s Office, in which he is a Hearing Officer presiding over cases ranging from zoning to environmental protection.

Co-founder & President of Debris-Free Oceans Caiti Pomerance received her B.A. from the University of Miami in Ecosystem Science and Policy, and thereafter received her J.D. from the University of FloridaLevin College of Law where she specialized in coastal and marine law and policy. While at the University of Florida, Caiti worked in the Conservation Clinic to facilitate the establishment of a marine protected area in the Bahamas and worked with other nonprofit organizations to fulfill their marine conservation goals, including the Surfrider Foundation and Audubon Florida. Upon graduation from law school, Caiti and two other UF Law graduates founded Debris Free Oceans, a nonprofit dedicated to inspiring local communities to responsibly manage the lifecycle of plastics and waste as part of a global initiative to eradicate marine debris. The organization focuses on raising awareness of the issue of single-use plastics through education, research and policy in Miami, Florida. Caiti is also a Board Member of the Marine and Waterfront Protection Authority for the City ofMiami Beach and in-house counsel at Terranova Corporation.