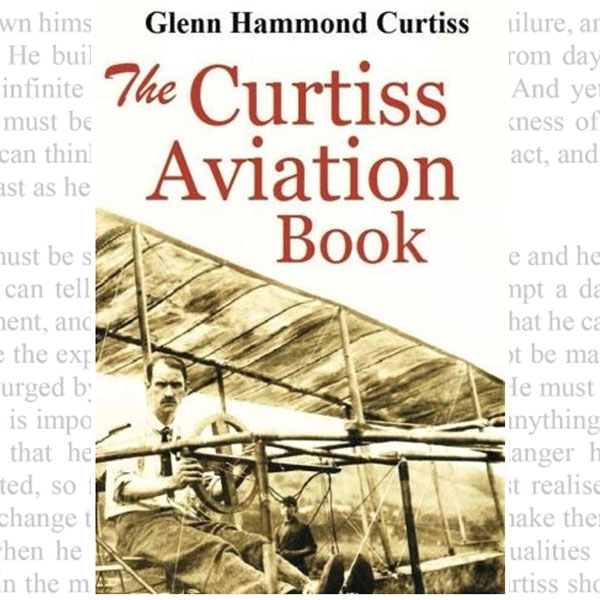 The History of flight written by Glenn Curtiss Himself. This book provides a rare opportunity to travel through time and let Mr. Curtiss explain the process that took the United States into the skies.

In “The Curtiss Aviation Book,” Curtiss tells how he changed from a boy working as a messenger for the Eastman Kodak Works to a pioneer aeronaut, in a few years; how, with Lieutenant “Tom” Selfridge, Alexander Graham Bell, and J. A. D. McCurdy, he was making public flights before the Wrights had finished their secret experiments; how it feels to win an international cup, or to drop into a “hole in the air” over the Hudson.

Curtiss made the first officially witnessed flight in North America, won a race at the world’s first international air meet in France, and made the first long-distance flight in the United States. His contributions to designing and building aircraft led to the formation of the Curtiss Aeroplane and Motor Company, now part of Curtiss-Wright Corporation. His company built aircraft for the U.S. Army and Navy, and, during the years leading up to World War I, his experiments with seaplanes led to advances in naval aviation. Curtiss civil and military aircraft were predominant in the inter-war and World War II eras.

Glenn Hammond Curtiss (1878 – 1930) was an American aviation pioneer and a founder of the U.S. aircraft industry. He began his career as a bicycle racer and builder before moving on to motorcycles. As early as 1904, he began to manufacture engines for airships. In 1908 Curtiss joined the Aerial Experiment Association (AEA), a pioneering research group, founded by Alexander Graham Bell at Beinn Bhreagh, Nova Scotia to build flying machines.

There are no reviews yet.

Only logged in customers who have purchased this product may leave a review.