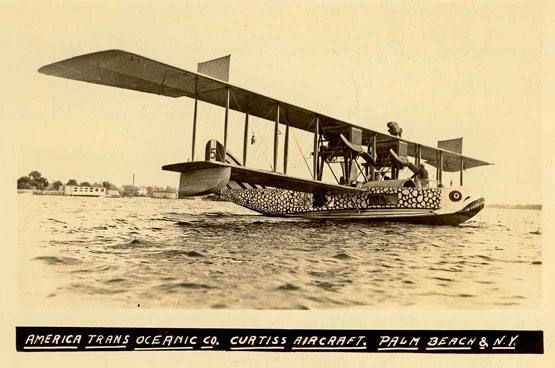 Curtiss and Wanamaker Partner for Aviation

In 1914, Wanamaker and Curtiss had formed the America Trans-Oceanic Company, named for their intent on making the first non-stop trans-Atlantic crossing. Unfortunately, it was delayed by the onset of World War I; then, ill-fated, when in 1927, the Wanamaker-sponsored flight arrived slightly short of landfall after Charles Lindbergh’s historical flight. Wanamaker had pursued his dream “…in the cause of science and world peace …for the uplift of the whole world…”

But instead, he and Curtiss began a commercial airline passenger venture between Long Island and Palm Beach, with Grover Whalen, as the company’s vice-president of operations.

The Rodman Wanamaker Flying School was set up in Port Washington. Once in Florida, Trans-Oceanic’s flying boats took off for Nassau, Bimini and Cuba. The company’s Palm Beach hangar housed seven planes.

The Big Fish was a converted 12-passenger Curtiss H-16 utilized for trips to Bahamas and Havana. Smaller, six-passenger planes were used for “joy hops” to Miami. The moonlight flight left Palm Beach at 5 pm and arrived in Jacksonville five hours later. The company made four trips a week to Bimini. In 1917, Atlantic City-Palm Beach was an 18-hr. flight; by 1921, New York-Palm Beach took 9 hrs. 56 mins.with one fuel stop.
In January 1920, Rodman Wanamaker and five companions, including son-in-law Gurnee Munn, were adrift for 26 hours, when his personal hydroaeroplane went down in the Atlantic between Palm Beach and Nassau. Upon their rescue, The New York Times wrote, “… flying to the Bahamas for a handshake with John Barleycorn was fast becoming the leading outdoor sport in these parts.”