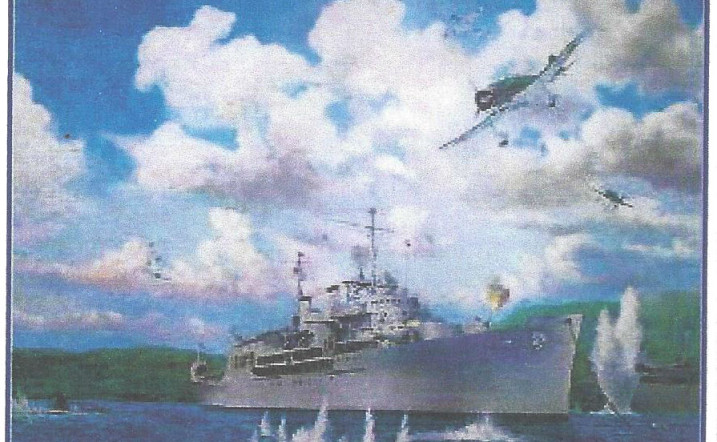 Glenn Hammond Curtiss
Glenn Hammond Curtiss, the renowned aviation pioneer, set many aeronautical records and designed many types of planes. His Navy Flying Boat was the first aircraft to cross the Atlantic in 1919. He trained many of the early naval aviators and is called the “Father of Naval Aviation.” Curtiss is also known as the “Father of American Aircraft Manufacturing” due to his wartime assembly line company that built some of the first US Navy planes. He was actively involved with naval aviation until his death on 23 July 1930.

USS Curtiss (AV-4)
USS Curtiss (AV-4) was launched 20 April 20, 1940 by New York Shipbuilding Corp., Camden, N.J., christened by Lena Curtiss Wheeler, Curtiss’s widow, and commissioned on November 15, 1940, with Commander S. P. Ginder in command.
USS Curtiss in Pearl Harbor
Curtiss operated out of Norfolk and in the Caribbean for training and fleet exercises in the spring of 1941. She got underway for Pearl Harbor on May 26 serving on patrol and tending two patrol bomber squadrons. From Oct. 15-Nov. 9, she carried aviators, air crewmen and cargo to Wake Island. When the Japanese attacked Pearl Harbor, Curtiss got underway immediately, firing at the enemy planes. At 0836 she sighted a periscope and opened fire. A torpedo from the submarine missed Curtiss, smashing into a dock at Pearl City. Four minutes later, the Japanese midget submarine surfaced and sustained more damage from gunfire before diving again; then Monaghan (DD-354) took over with a depth charge attack.
Curtiss turned her attention to the air again. At 0905 she hit an enemy plane that crashed into her No. 1 crane and burned. Three minutes later she splashed a plane and began firing at a dive bomber. A bomb from this plane crashed into Curtiss near her damaged crane and exploded below decks, setting the wooden-hangar main decks and No. 4 handling room on fire. Despite 19 dead and many wounded, Curtiss’s crew quenched the fires, and then began emergency repairs. On December 28, she was underway for San Diego for permanent repairs and replacement of the damaged crane with 20-mm guns. Her repairs completed in only 4 days, she was back in Pearl Harbor on January 13, 1942 to begin the job of ferrying men and supplies to forward bases at Samoa, Suva and Noumea until June.
The Curtiss Mansion salutes the brave men of the USS Curtiss.